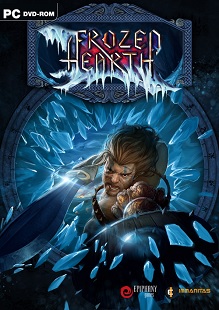 Frozen Hearth was delisted from Steam on December 29th, 2016. It was likely removed from other digital stores around this time or earlier. The game was initially released in 2012 through GameStop, Gamersgate, Desura, Get Games Go, Markee Dragon, Rain DG, and Impulse before coming to Steam in 2013.

In reply to a Steam Community forum post in 2017 asking what happened to the game, Morgan from Epiphany replied, “basically what happened was somthing with the publisher, the game reverts to us now. We will republish this game, and maybe do some stuff.”

As of this writing, Epiphany Games has not made any new announcements about the game’s return.

“Our Real-Time Strategy game, ‘Frozen Hearth’ is the first title in Epiphany Games’ Ámorrá world-setting, and the first chapter of an ongoing saga that players will help to unfold over a number of games. Frozen Hearth introduces us to the Danaan – a Celtic-inspired race of people who are having their homelands invaded and ravaged by a bloodthirsty breed of supernatural creatures, whose bodies are made of ice.

To make matters worse, as the icebound monsters advance they bring with them an unstoppable tide of ice and snow that will cover and destroy all before it. Faced with such insuperable might, the Danaan will have to do the one thing they have never been able to: co-operate! Join – either alone, or in our groundbreaking co-operative campaign – the Danaan in their struggle for survival, as they rush to rescue what they can of their people and their culture before it is buried beneath a frozen waste!“

Some of the many features include: