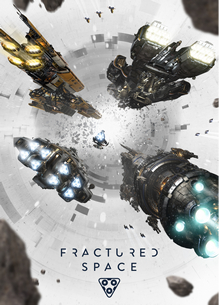 After long deliberation, the very hard decision has been made for us as a studio to move on from further development of Fractured Space; this will enable us to look towards new projects. Whilst no additional content, updates or patches will be released for Fractured Space, we do plan to keep the servers online for the foreseeable future, so everyone can continue to play the game in its current state, with all its current modes.

As a part of this update, all Platinum will be stripped from the game – any Platinum you currently have stored in your account will be converted into Credits at a rate of 550 Credits per 1 Platinum. All items that were previously sold for Platinum will now be available to purchase with Credits (such as Ship Skins, Bundles, and Credit Boosters). With this release, the Infection Episode Pack will be available to purchase for just 1 Credit. Steam DLC will no longer be purchasable from within the game, from the Steam Store, or from authorised third-party vendors. However, existing unredeemed keys will still be redeemable in Steam for the content advertised when the key was purchased.

It’s been an amazing and emotional journey, we wouldn’t be anywhere without our incredible players – you’ve been awesome to us. We thank you for all the support over the years, and for the fantastic memories we’ll hold dear to us for the rest of our lives. And remember, we always had Gamma.

Shortly after the announcement, in November of 2018, Edge Case Games was acquired by Wargaming. It has been suggested that Fractured Space was retired in order for the acquisition to go through and that Wargaming would not support the game’s ongoing development.

On February 6th, 2019, a member of the development team confirmed on the Fractured Space Discord server that the “foreseeable future” for the game had run out. By the end of February Fractured Space would be offline and unplayable:

Well, my friends, sad news I’m afraid;  It seems that at the end of this month the Fractured Space servers and back-end will be shut down.  Whilst I’d love to be able to keep things going, it seems it’s just not going to be possible. The situation is too complicated to be able to either release the servers or emulate the backend, so the upcoming tournament is looking like the last hooray for Fractured Space – It has been an incredible blast.  This has, for all of the dev team, been a fantastic journey and we’re proud of what we achieved, and we’re proud of all of you – the people that made FS great. Let’s give it a grand send-off this weekend in a huge wave of explosions!

By February 28th, 2019 the game was removed from Steam while work began among fans to create private servers for the game. On July 18th, the same Edge Case staffer returned to the game’s Discord server to announce an official fan server project at oseven.space.

“Fractured Space is a team-based space combat game where two teams fight epic battles in massive capital ships. Combining the intensity of a shooter with the big picture thinking of a strategy game, Fractured Space offers a new frontier in tactical combat. Players can earn credits to expand and upgrade their fleet, with a wide variety of ships across numerous classes and manufacturers to choose from. Fractured Space is currently scheduled for PC release on Steam Early Access later this year before a wider free-to-play release in 2015.“

Thanks to Sierran for submitting this game to the site