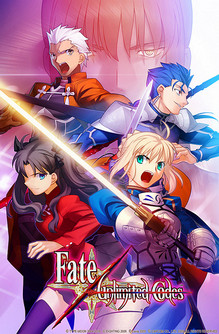 Fate/unlimited codes was delisted in North America (and presumably Europe) on June 12th, 2012. Capcom gave advanced notice on May 30th that their license to the visual novel series Fate/stay night was expiring and that the game would be removed from sale.

“Hi there PlayStation fans. I’d like to share with you an overview of the different modes you’ll see in Fate/unlimited codes. There are a total of eight modes that are available, giving you a variety of gameplay experiences.

Arcade Mode: This mode pits you against the CPU controlled opponents as you advance through the story as the character you’ve selected. Each of the selectable characters has their own storyline. Play through them all and see how each character is connected in the Fate universe.

VS-CPU Mode: Battle against a CPU character of your choice. Different characters can be selected after each battle.
Spectate Mode: Watch a duel between any two CPU characters. This is a good way to observe the tendencies of each fighter.

Survival Mode: This mode challenges you to battle against a constant stream of opponents until your life bar is depleted.
Additionally, there is the Tutorial Mode which can be absolutely useful for both beginners and skilled players. In this mode, you learn how to execute each character’s move set. Standard and Expert settings are available to learn different levels of gameplay techniques, from basic moves to high level combos.

The Practice Mode will help you improve your skills by allowing you to configure the CPU settings such as conditions and reactions. In addition, on-screen controller/button prompts will assist you to study combos while allowing you to record and replay the inputs.

Last but not least, there’s the Mission Mode. This mode sends you on special missions, consisting of battles bound by particular conditions. Each character has a unique set of missions. New missions are unlocked for each mission cleared. The goal for each mission varies from accomplishing a set combo to defeating the opponent with a certain move. There are over 250 missions in total! This is a great way to increase your technical fighting skills. I highly recommend you try this out. Moreover, there are surprising extra missions provided for each character, such as a side-scrolling shooting game and other non-VS fighting style games.

The development staff members at Eighting not only have a deep passion for fighting games but are also top class, tournament fighting gamers themselves. The Capcom QA team also has first class gamers who are ranked at national fighting competitions in Japan. We have tapped into their vast fighting knowledge and experience to tune and balance Fate, and we’re definitely happy with how this game turned out. I can tell you with confidence that we have created a special fighting game that appeals to both the casual fighting fan and the expert tournament player. I hope you try it out today. Thank you so much for your time!“