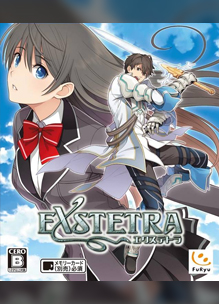 Exstetra was delisted on Nintendo 3DS in Japan on May 30th, 2018. The game’s eShop page was likely updated to advise of the upcoming delisting but after May 30th it only reads “distribution of this software has ended at 17:00 on May 30, 2018 (Wednesday)”. The game was likely delisted on PlayStation Vita in Japan around this same time. The eShop page includes a JASRAC license number and suggests that the delisting may be related to expired licensing of music featured in the game.

Suddenly merged with Tokyo Set in a different world, “Amazia,” the main character, Ryoma, is an adventure story that saves two worlds from the danger of destruction as the chosen savior, “Prisma.” How to awaken the eggs of the “Knight of Prisma” destined to fight together … Ryoma’s “Kiss”-!?

In the game, select an area from the field and explore the dungeon. Find the egg of the Prisma Knight who has fallen into Amazia, awaken it with a kiss, and develop an adventure to save the world. Information gathering, rest, and buying and selling of items are done in the village. Depending on the conversation with your peers and the progress of the story, events can occur and new areas can be explored. The battle occurs by encounter in the dungeon! It will be a command type party battle of up to 4 people. When the gauge accumulates during battle, you can unleash your fellow power “Ex Technique” with a kiss! You can add various effects by enchanting “Ability” to weapons and accessories. Abilities can be obtained by buying them at a magic shop or by defeating enemies. A dramatic event awaits the hero! -Nintendo Japan (Google Translated)

Thanks to Aruru-san for submitting this game to the site