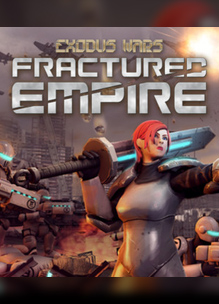 Exodus Wars: Fractured Empire was delisted on Steam on April 23rd, 2018. According to developer The Magos who replied to a Steam Community forum post, the license agreement with Steel Crown Productions had expired and Membraine Studios was no longer able to sell the game.

Exodus Wars: Fractured Empire is a 3D turn-based strategy wargame that puts you in brigade-level control of futuristic infantry and armored companies, as well as huge super-vehicles. This is warfare on a massive scale that will appeal to those who enjoy games that provide both a strategic and tactical challenge, such as the Total War PC game series or tabletop games like Warhammer 40,000. Featuring a unique, streamlined command system for fast-paced battles with Chess-style alternating activations, customizable armies, and simple–yet deep–strategic and tactical play, the game tells a story from the Exodus Wars, a bloody civil war fought between the Guild and the Royal Empire of Man.