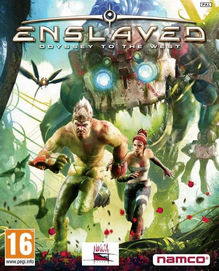 Enslaved and it’s DLC was quietly relisted on the Xbox Marketplace no later than September 17, 2019 in Europe and Australia. No explanation was given for it’s relisting, but the game’s publishing info was updated to match Bandai NAMCO’s current corporate identity.

The European and Australian Xbox 360 Games on Demand version of Enslaved: Odyssey to the West was last confirmed available on March 26, 2018 and next confirmed delisted by April of 2018 by TrueAchievements.com.

The cause for the delisting is uncertain. Possibilities include changes to Namco’s corporate structure over the years and across the regions. Some older releases are credited simply to ‘Namco’ where newer titles read ‘Namco Bandai Games’, neither of which represent the current entity of ‘Bandai NAMCO’. The split between the American and European divisions may also explain how we end up with a game delisted in some regions but not others, or delistings that are a year or more apart. The game remains available on Steam as of this writing as well as on the Xbox 360 in North America and the PlayStation 3 worldwide.

Follow a gripping, surprise-filled journey as two dissimilar characters form an uneasy partnership in order to survive through a perilous, post-apocalyptic America where few humans are left and nature has reclaimed the world. Play as Monkey, a strong brutish loner who has been captured by a mysterious slave ship. Trip, a technologically savvy young woman and fellow prisoner, hacks a slave headband and commands Monkey to help her get home. If she dies, he dies, and her journey has now become his.