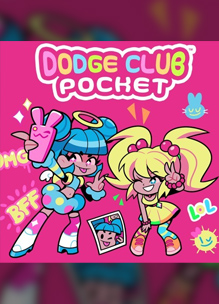 Dodge Club Pocket was delisted on Nintendo 3DS in North America no later than January 23rd, 2022. The Dodge Club Party Twitter account announced the delisting on January 23rd and creator James Montagna retweeted it to add a little more context.

Dodge Club Pocket has been delisted from the Nintendo 3DS eShop worldwide, and will no longer be available due to reasons outside of our control. Thank you to everyone who took a chance on this funky little game!

Sorry for this news 😔 Everyone that enjoyed Dodge Club Pocket, from the bottom of my heart, THANK YOU. I was going to be a bit more coy, but whatever—here’s better news: my happy hardcore cohorts and I are going to explore taking Dodge Club to Switch sometime soon. Stay tuned ☆

As of this writing Dodge Club Pocket was still available on the European 3DS eShop but as Montagna himself tweeted, it likely won’t be for long. The game had previously been delisted on Android and iOS. Its Wii U counterpart, Dodge Club Party,  and Montagna’s other Wii U release, Dot Arcade, were delisted in 2019.

Play the world’s most pixelated game!

The underground ravers of Dodge Club invite YOU to play in their pixel dance party. Dodge the red hot fireball and electric spark in a variety of unique minigame challenges, each one more wild than the last! As you play, you’ll even unlock mysterious bonus content in the form of “presents”, including new characters, comics by Linzb0t, extra music, and more. Speck and her raver friends can’t wait to meet you, so join the club now on your Nintendo 3DS™ with Dodge Club Pocket!