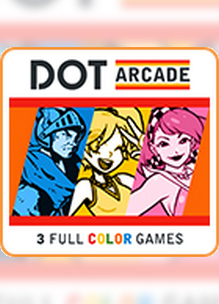 Dot Arcade and Dodge Club Party were likely delisted from the eShop for the Nintendo Wii U in the first half of 2019. The delisting is likely related to Nintendo’s developer/publisher licensing. According to sources in 2019, Nintendo stopped renewing select Wii U licenses and once the existing licenses expired all titles from a developer or publisher were eligible to be removed without recourse.

The original, physical version of both games remains available where and when it is presented by James Montagna. The mobile iteration, Dodge Club Pocket, was delisted on Android and iOS and remained available exclusively on Nintendo 3DS until it too was delisted by January 23rd, 2022.

“Step up and experience the brilliant 8×8 light cabinets of Dot Arcade! You’ll enjoy a collection of 3 FULL COLOR GAMES, right on your TV or Wii U GamePad™! Each dot game is focused on a different core of fun gameplay in its most simple form. Stunning “cabinet art” frames the game screen with the designs of featured artists… you may discover additional hidden designs too!

Have you become a local legend for your dot game skills? Take it global and share top scores on Miiverse. Friends everywhere are ready to have a Dot Arcade showdown with YOU!“

Mr. Snake – Become a galactic snakeback rider on a rip-roaring ride through the asteroid belt! Gobble up cosmic gem fruits, and try not to crash!

Dodge Club – The fans are going wild! Put on a show for them as you guide your dancer about a dangerous disco floor — how long can you go?

Rally Driver – You’re in the driver’s seat of the fastest Formula D racer on the road. Overtake the other cars and become the speed master of Rally Town!

Thanks to Darth Kirby for submitting this game to the site