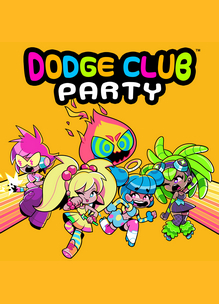 Dot Arcade and Dodge Club Party were likely delisted from the eShop for the Nintendo Wii U in the first half of 2019. The delisting is likely related to Nintendo’s developer/publisher licensing. According to sources in 2019, Nintendo stopped renewing select Wii U licenses and once the existing licenses expired all titles from a developer or publisher were eligible to be removed without recourse.

The original, physical version of both games remains available where and when it is presented by James Montagna. The mobile iteration, Dodge Club Pocket, was delisted on Android and iOS and remained available exclusively on Nintendo 3DS until it too was delisted by January 23rd, 2022.

“Throw your own pixelated party! The interactive installation that toured across North American art galleries, night clubs, and festivals can be enjoyed by anyone for the first time, exclusively on Wii U™!

Dodge Club Party is a frantic multiplayer free-for-all in an impressively micro 16×16 pixel arena — pumped up to the size of your TV screen. Will you mischievously sabotage other players to be the last one standing? Or perhaps you can all work as a team for the highest score of the night! Once the red hot fireball is let loose, anything goes!“

Thanks to Darth Kirby for submitting this game to the site