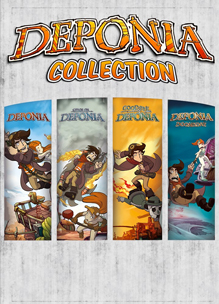 Nothing but junk – As far as the eye can see. Rufus’s homeworld Deponia is a planet-sized junkyard. When the beautiful Elysian girl Goal falls into his arms – quite literally – Rufus’s dream to leave Deponia seems to be within arm’s reach as well. Accompany Rufus on his crazy adventure and the most bizarre love story in videogame history. Only after surviving wild chases, building insane gadgets, and with a dash of heroism you can overcome this journey.