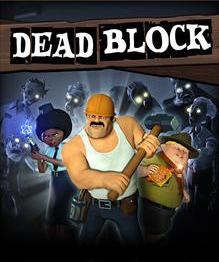 Dead Block was delisted on Xbox 360 between August 28th and October 5th, 2015. This aligns with the end of licensing terms between Xbox co-publishers Digital Reality and Bandai NAMCO.

Digital Reality was shut down in September 2013; their homepage is currently unavailable and their Facebook page remains untouched since 2013. On February 2, 2016, Nordic Games announced they had acquired several Digital Reality properties through their subsidiary Nordic Games Licensing AB. Dead Block remains available on PlayStation Network across US and European territories with the publisher listed as Digital Reality Publishing. On PC it is published by Kalypso Media Digital.

It appears neither Nordic Games nor Bandai NAMCO has sought to renew the Digital Reality Xbox Live Arcade titles after Nordic Games’ acquisition.

“Are you good enough to survive a Zombie Armageddon? Don’t panic! Use your brain first and if necessary your sledgehammer. Dead Block is a 3rd person zombie themed arcade game with a unique mix of action, humor and strategy.

Set in the US during the idyllic 1950s, Dead Block takes players to a simpler time when a gallon of gas cost a few pennies, the “golden age” of cinema was in full swing, and that new (and apparently insanely evil) craze called rock n’ roll swept the nation—and caused an apocalyptic musical plague to turn the deceased into the walking dead!

As one of three survivors of the shuffling zombie onslaught – Boy Scout Mike Bacon, construction worker Jack Foster, and no-nonsense meter maid Foxy Jones, each with their own unique “Smart Bomb” attack – players will fortify their area by boarding up windows and setting a variety of unique unlockable traps, collect items and power-ups, take on zombies one-on-many with a variety of upgradeable weapons, and even rock them to shreds with awesome guitar power!“