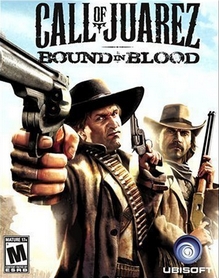 As expected, Call of Juarez: Bound in Blood was returned to sale on Xbox 360 in all territories in early September 2019. Google Cache archives show it was still unavailable on September 1st but returned no later than September 3rd. As with other Call of Juarez titles that have returned to sale, Techland is now listed as the publisher after regaining franchise rights from Ubisoft in 2018.

Call of Juarez: Bound in Blood was likely delisted from Xbox 360, PlayStation 3, and Ubisoft’s own digital PC store on or around July 12th, 2019. Google Cache archives show the game was last available directly from Ubisoft on June 20th with its removal on Xbox 360 first noted on July 26th. The full version of the game on PlayStation 3 was likely delisted around this same time, although as of this writing the PlayStation Plus ‘Full Game Trial’ remains available exclusively in North America.

The Steam version of the game was updated on July 12th, 2019 when the publisher changed from Ubisoft to Techland Publishing. This follows the same delisting/relisting trajectory that Call of Juarez: The Cartel and Gunslinger took in 2018 after Techland was able to acquire the rights to the series from Ubisoft.

It is likely that Bound in Blood was delisted after Ubisoft’s license to publish the title on consoles ended. It is expected to return to Xbox 360, if not PlayStation 3 as well, before the end of 2019.

“In the remote and deadly Wild West, the outlaw McCall brothers are on a quest for the legendary Gold of Juarez. In their journey across a vast landscape, these lawless gunslingers will stop at nothing to achieve their goal. Arm yourself with pistols, cannons, machine guns and more as you strike out on a mission with two fearless compatriots whose bonds of blood are only strengthened by the blood they spill together.

Join Ray and Thomas McCall on a doomed quest for the Gold of Juarez. Play as either Ray or Thomas and become a true gunslinger by using each brother’s distinctive skills to help you overcome amoral outlaw opponents like a renegade Apache chief, a greedy Mexican bandit and a vindictive colonel. Then take the fight online for intense multiplayer action with unique modes, numerous maps and a variety of classes designed to provide a thrilling Wild West experience. Take on the Old West today.“