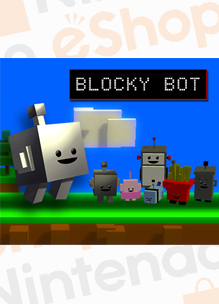 Blocky Bot and Paper Monsters Recut were initially under threat of delisting when Mobot Studios announced their closure on March 6th, 2017. At the same time Crescent Moon Games took over as the publisher for both titles in North America and maintained their availability presumably until some point between 2018 and 2019. This timeframe marks a known period where several independently published releases were being removed from the platform, allegedly because Nintendo of America was no longer renewing their developer/publisher licenses.

Blocky Bot alone remains available on the Nintendo Wii U in Europe where Mobot Studios is still credited as the publisher. As Paper Monsters Recut was delisted in that region, Blocky Bot’s existence is likely due to an oversight and the game could disappear at any time.

Super 3D Platform Mini Arcade Action! Jump your way through a wacky world of robots, wizards, ninjas and the first ever playable box of robotic French fries! Blocky Bot is a brand-new super action mini-platformer for Wii U, from the same team that brought you Paper Monsters Recut. Test your platforming skills and reflexes by collecting Bits and Bytes to unlock new characters and themes, and push yourself for the best score and blocky bragging rights!