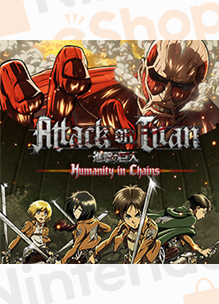 Attack on Titan: Humanity in Chains was delisted on the Nintendo 3DS eShop in North America, Europe, and Japan between May 8th and May 11th, 2018. A Google Cache copy of the North American Nintendo.com page on May 8th shows the game still available to download. The game was submitted to us on May 11th and by that time the page had been removed from Nintendo.com. According to the anonymous submission, the game had recently been on sale but we couldn’t find the date when the sale ended. The European and Japanese delistings are assumed to have taken place around the same time.

Humanity in Chains was the only Attack on Titan title developed by Spike Chunsoft and published by Atlus. As the submission suggested, the delisting is likely due to an expired license or contract between the developer, publisher, or the Attack on Titan property owners.

“Based on the hit “Attack on Titan” anime and manga, players will defend the three Walls from invading Titans as a member of the elite Scout Regiment with their omni-directional mobility gear and blades. Based on the upcoming Japanese remake of an earlier Attack on Titan game, Humanity in Chains will be the first Attack on Titan game to reach North American shores, and will release exclusively on the Nintendo eShop for Nintendo 3DS in early 2015 with the original Japanese audio and English subtitles.”

The features for Attack on Titan: Humanity in Chains include: