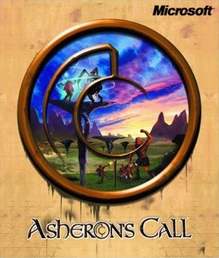 “Welcome to the online role-playing game Asheron’s Call, where thousands of players inhabit a beautiful 3D fantasy world to make friends and seek out perilous adventure. Customize your alter ego with a unique appearance and balance of heroic skills, then enter a magical frontier of terrible monsters, breathtaking vistas, and fast alliances. With over 500 square miles that offer ever more wonders to explore, Asheron’s Call gives you a world of unparalleled scope and freedom, the richest setting yet for creating your personal saga or joining your friends in an epic campaign.”

“Launched in 1999, AC is a critically acclaimed massively multiplayer online role-playing game that draws together thousands of players within an evolving and dynamic persistent world. With an exciting ever-evolving storyline, thrilling adventures, quests, and frequent content updates, AC immerses players in an intense role-playing environment. An extensive system of formal Allegiances and player influence greatly enhances social interaction within the game. AC has received several awards over its 10-year history including being ranked #27 of Gamespy’s Top 50 games of all time.”