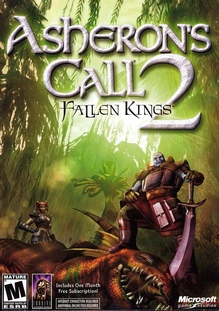 Asheron’s Call 2 was originally shut down on December 30th, 2005 two years after Turbine purchased the franchise from Microsoft and began self-publishing the games. It was relaunched in 2012 exclusively to players with an existing Asheron’s Call account.

“Asheron’s Call 2: Fallen Kings, the sequel to the popular massively multiplayer online role-playing game (MMORPG) Asheron’s Call, will advance the MMORPG genre with the advanced Turbine Engine G2 graphics engine, providing some of the most sophisticated graphics available on a PC. Asheron’s Call 2 Fallen Kings features a dynamic, evolving fantasy world that reacts to players’ behaviour and actions. Developed by Turbine, the game includes features such as a revamped combat system and new in-depth crafting system that gives players a chance to pursue noncombative skills.”