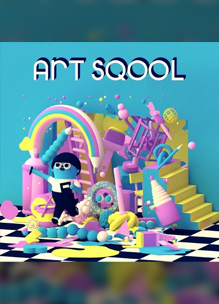 U r a froshmin at A R T S Q O O L.
Ur assignments are generated & graded by an A.I.
Can a video game make you more creative?
Can a video game make you a better artist?
Can you graduate from Art Sqool? Idk,,, that’s on u!
Explore the sprawling Art Sqool campus in 3D
Find and collect cool brushes to help you in your artistic process like the wiggle brush, rainbow pencil and mop.
Use your drawing pad to complete your assignments and progress through the game.
An A.I. art professor grades your work and hands out assignments
Over 200 inspiring prompts to help u break thru any creative block.
4-6 hours of gameplay
Creative fulfillment basically guaranteed
Soundtrack is a banger

Thanks to Dots Salchow for submitting this game to the site