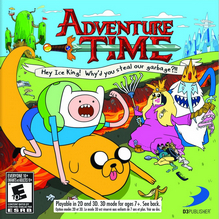 Adventure Time: Hey Ice King! Why’d You Steal Our Garbage?! Was presumably delisted at the end of 2016 alongside Adventure Time: Explore the Dungeon Because I DON’T KNOW!, also published by D3 Publisher and developed by WayForward. Adventure Time: The Secret of the Nameless Kingdom was also delisted around this time but only on Xbox 360.

“This is the first video game based on the radical, Emmy nominated Cartoon Network show about Jake, a wise dog with a big kind heart, and Finn, a silly kid who wants more than anything to become a great hero.

Adventure Time show creator Pendleton Ward is heavily involved with the game creation, including the design of a brand new storyline and concept. Set out on heroic quest in a unique action adventure experience!

Finn and Jake wake up one morning to find their trash stolen by the Ice King! Jake couldn’t care less about half-eaten bananas and old chicken diapers – but when the Ice King uses these stolen goods to construct a Garbage Princess, our heroes embark on an adventure and teach him a lesson! Journey through the Land of Ooo in an offbeat adventure to discover perilous dungeons, unimaginable treasures, the true meaning of friendship, and never-ending fun!“