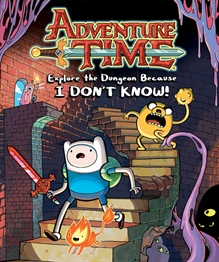 Adventure Time: Explore the Dungeon Because I DON’T KNOW! was removed from Steam on December 19th, 2016. It was last confirmed available on Xbox 360 on November 6th and gone by January 13th, 2017. It is presumed that the console versions of the game were also delisted on December 19th or some time by the end of 2016.

Adventure Time: The Secret of the Nameless Kingdom was also delisted around this time but only on Xbox 360. The other console and PC versions remained available until 2018. Adventure Time: Explore the Dungeon Because I DON’T KNOW! remains available on physical media for all platforms except PC where it was only released digitally.

“Adventure Time: Explore the Dungeon Because I DON’T KNOW! is a brand new action game from the creative minds of Pendleton Ward (creator of the award-winning Adventure Time animated series) and game developer WayForward, and is the follow-up to the mathematical, algebraic, and radical success of last year’s IGN Editors’ Choice recipient Adventure Time: Hey Ice King! Why’d You Steal Our Garbage?!!.

The adventure begins with a completely new storyline staged in the Land of Ooo as players help Princess Bubblegum save the Candy Kingdom by exploring the mysteries surrounding a massive Secret Royal Dungeon. In Adventure Time: Explore the Dungeon Because I DON’T KNOW!, play as multiple fan-favorite characters from the show with up to four players, including Finn, Jake, Marceline, Ice King, and more and showcase your best attack moves with special abilities and skills to defeat baddies throughout the dungeon.”