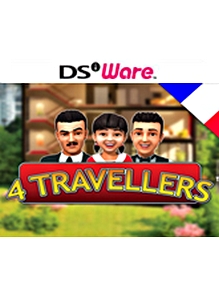 4 Travellers – Play French and 4 Travellers – Play Spanish were initially delisted from the Nintendo DSi Shop on March 31st, 2017 when the marketplace was shut down. The titles remained available on the 3DS eShop in North America for some time but appear to have been removed after January of 2018. Their disappearance was next pointed out to the site in April of 2020. Peculiarly, both titles remain available in Europe but can only be found in the eShop directly on a Nintendo 3DS.

As the games were developed and published by AGENIUS in both territories, the delisting seems to be specific to Nintendo of America. Perhaps related to publisher licensing or a “closeout” of titles available on the 3DS eShop.

“Challenge your family and friends in a new digital board game, and at the same time learn your first words in a new language together. You compete in a foreign hotel where the goal is to acquire objects, money and friends. Your ability to strategize and learn fast is essential. The game is suitable for both young and old, and no previous knowledge is necessary. The more you play the more your French vocabulary increases. The game is perfect to bring on your trip, and over 240 carefully selected words are included specifically for this occasion.“

Thanks to DarthKirby for submitting this game to the site