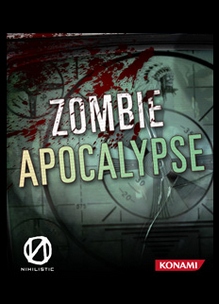 Zombie Apocalypse was delisted from Xbox 360 in April of 2019 according to reporting from TrueAchievements.com. The game was likely delisted around this same time on PlayStation 3. Peculiarly, the game’s successor, Zombie Apocalypse: Never Die Alone was previously delisted in 2016. It is uncertain why the original entry remained available for so long or why it was ultimately delisted.

One possibility is that the game was underperforming after so many years of availability and rather than continue to support it, Konami simply chose to remove it from sale.

“Zombie Apocalypse casts up to four players as heavily-equipped gun-slingers left to fight for survival in a world where the undead have risen and are feasting on the living. As such, Zombie Apocalypse sets players the grisly task of destroying as many zombies as possible in order save the last remaining human survivors.

Using an array of up to eleven lethal weapons that includes assault rifles, flame throwers and a teddy bear filled with C4 explosives, players can play together on one console or online as they work together to stop the zombie attacks and rescue survivors. Players can also use a chainsaw to melee zombies and can also use environmental hazards to crush, burn, slice, or cause other types of destruction on the masses of zombies.

The eradication of the undead rewards the players with points, as they compete for high scores which are logged online. Zombie Apocalypse’s action-packed, arcade-style shooter will test gamers’ shooting skills and their ability to survive 55 days of battles across the game’s seven environments. Failure results in players becoming one of the undead, and on completing the mission, players can re-live the apocalypse with seven challenging unlockable game modes.“
– Press Release

Thanks to Lorath for submitting this game to the site