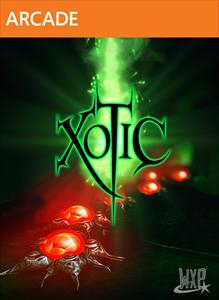 Xotic was most likely delisted in the first week of January 2018. TrueAchievements.com posted a delisting roundup on January 9th featuring nine titles from publisher Valcon Games. As of August 2019 each title remains available to download on Steam, PlayStation 3, or both (as well as on physical media for various platforms).

“Xotic is an arcade-style first-person shooter where you rack up huge scores by shooting enemies, detonating chain reactions, and discovering secret power-ups and point multipliers. Armed with a weaponized symbiotic creature called the Macroterra, you must cleanse the evil presence and re-plant the seeds of life on a planet ravaged by the minions of the Orb.

Destroy the insidious scab plants and new life will grow in their place, diminishing the Orb’s control of the planet. Trigger scab plant chain reactions to earn score multipliers and chain bonus points. Collect Orb essence to boost your score, or grab them in mid-air to earn an aerial combo bonus. Seek out and destroy the hidden Orb brains and collect all of the Orb essence in each level for even more points.

Earn experience points to upgrade your weapons and skills, including “Absorbtion” which pulls points towards you automatically! Unlock the secrets of “Hard Hologram” technology to deploy mobile shields or aerial landing platforms.

Xotic is a unique arcade shooter experience unlike anything you’ve played before. Get it now!“