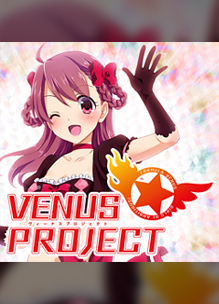 Developer/publisher Galat announced on November 5th, 2015 that Venus Project would be removed from sale in late December and shut down on February 3rd, 2016, after which time the game would be inaccessible. Like their previous title, Magica Wars Zanbatsu, Venus Project was free-to-play, available only for a limited time, and built around in-game purchases.

While Galat only announced that the game would be shut down, it appears that the studio may have ceased operations altogether in early 2016. The homepages for both Venus Project and Magica Wars, as well as GalatGames.com are no longer online. The @GalatGames Twitter account has not been active since December of 2015.

Google Translation:
“VENUS PROJECT” is an idol training card battle RPG that supports young idols aiming to become top idols and aims to become the world’s highest peak idol performance battle tournament “FORMULA VENUS”. Players choose their own “push” idol from the game characters and grow the character while performing various entertainment activities such as training and performance battles with rivals. It is a new idol game that incorporates various elements such as “Story Mode” that follows the hot-blooded story of the three protagonists, and a player-participation-type event in which the idols that are recommended for management change depending on the ranking results.