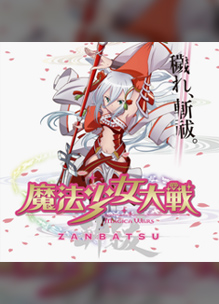 Magica Wars Zanbatsu was delisted and shut down on December 22nd, 2015. Although the game was free-to-play and required online services to function, Galat released a final update on December 28th allowing owners to continue playing in an offline mode. Unfortunately, the game’s homepage and blog where most of the news was shared has since gone offline. It appears that the studio may have ceased operations altogether in early 2016. The homepages for both Venus Project and Magica Wars, as well as GalatGames.com are no longer online. The @GalatGames Twitter account has not been active since December of 2015.

Google Translation:
The third game following the game app and browser game! “Magical Girl Taisen ZANBATSU” is now available on PlayStation®Vita! In the full-voice magical girl action game “Magical Girl Taisen ZANBATSU”, the main character “Amane Sakaki” and the god “Yamada” (Yamada) tell a story while purifying “injuries” with magical girls all over the country. It is a game to advance. The flow of the game progresses in two parts: the “mission” part, which is action play, and the “contact” part, where you talk to magical girls in each region.