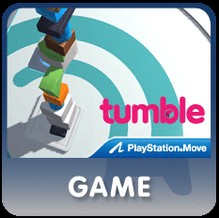 As of October 2016 the game remains available to purchase on the Hong Kong PlayStation Store and from GameStop.com.

“Welcome to the world of Tumble; a 3D puzzle/brain teaser for 1 – 2 players. Grab your PlayStation®Move motion controller and get ready to test your mental and physical agility as you build, balance, solve & destroy your way through a vast array of challenges. Whether playing single-player, collaboratively or competitively in multiplayer, Tumble will challenge you, entertain you, and keep you coming back for more.“