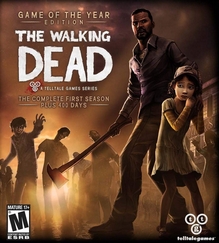 The Walking Dead was delisted from Steam on November 15th, 2018 and from GOG.com on November 20th, 2018. On Steam its price was set to $0.00 leaving its store and Community pages accessible. On GOG.com the only trace that remains is a forum post by team member Chandra regarding the entire The Walking Dead series from Telltale:

“Play as Lee Everett, a convicted criminal, who has been given a second chance at life in a world devastated by the undead. With corpses returning to life and survivors stopping at nothing to maintain their own safety, protecting an orphaned girl named Clementine may offer him redemption in a world gone to hell. Experience events, meet people and visit locations that foreshadow the story of Deputy Sheriff Rick Grimes. A tailored game experience – actions, choices and decisions you make will affect how your story plays out across the entire series.“