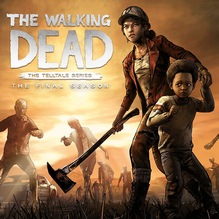 The Walking Dead: The Final Season returned to sale on PlayStation 4 and Xbox One no later than January 15th, 2019 with the release of Episode 3: Broken Toys. The “buy digital” link was never removed from the game’s page on Nintendo.com. Unfortunately, with the change in publisher to Skybound Entertainment, the Steam and GOG.com versions of all of Telltale’s The Walking Dead titles did not return until January of 2020.

Skybound Entertainment confirmed on December 20th, 2018 that owners of any PC version (Steam, GOG, Humble) would be able to download the final two episodes when they are released. However, going forward The Final Season would only be available to buy digitally on PC from the Epic Games Store until 2020. The original delisting information follows.

The Walking Dead: The Final Season was delisted from Steam, GOG.com, Xbox One, and PlayStation 4 on September 25th, 2018. This was the same day as the release of Episode 2. At the time, the episode (and the season pass) were still available to buy on Nintendo Switch and on PC from Humble Bundle. Shortly after being removed the game’s GOG.com and Steam pages were updated with the following statements:

“Telltale has requested a temporary pause of sales of The Walking Dead – Final Season. For all up to date Telltale news, please refer to their official Twitter page.” – GOG.com

“ATTENTION: We have removed season passes for The Walking Dead: The Final Season from stores for the time being. We’re currently still working to find a way to hand off production of episodes 3 and 4 so that the season can be completed. The outcome of those efforts will determine when and how The Final Season returns to stores. We hope to have a firm announcement before the end of the week. For now, we apologize for any inconvenience.” – Steam

At the time of this writing Telltale had yet to update their social media pages but announced in a post on September 24th that “multiple potential partners have stepped forward to express interest in helping to see The Final Season through to completion”.  The sudden delisting would give the remaining staff at Telltale time to work with a new publisher and arrange a new release schedule, assuming a deal is completed. For now, the game’s final season has been rendered Extinct as the physical release that was due in November of 2018 has also been canceled.

“Clementine, now a fierce and capable survivor, has reached the final chapter in her journey. After years on the road facing threats both living and dead, a secluded school might finally be her chance for a home. But protecting it will mean sacrifice. Clem must build a life and become a leader while still watching over AJ, an orphaned boy and the closest thing to family she has left. In this gripping and emotional final season, you will define your relationships, fight the undead, and determine how Clementine’s story ends.“