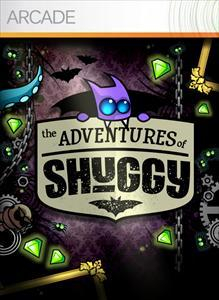 The Adventures of Shuggy was most likely delisted in the first week of January 2018. TrueAchievements.com posted a delisting roundup on January 9th featuring nine titles from publisher Valcon Games. As of August 2019 each title remains available to download on Steam, PlayStation 3, or both (as well as on physical media for various platforms).

“The Adventures of Shuggy is a retro-styled 2D platform game available on XBox Live Arcade and PC via DRM-free direct download and Steam. It’s a 2D platformer containing a variety of different levels with a leaning towards puzzles.  There are over 100 single player levels and 36 Co-Op levels connected through a gradually unlocking map screen ensuring there is always a variety of levels to choose from.

Various different mechanics give each level a fresh spin with Shuggy travelling in time, swinging on ropes, rotating levels, turning to a zombie, shrinking, growing, flying, teleporting and more.

The game takes place in an old Scottish mansion recently inherited by young Shuggy, a cartoon vampire.  To clear the mansion of evil spirits he must venture through the five different areas of the mansion, The Dungeon, The Boiler Room, The Gallery, The Graveyard and The Clocktower.  Progress through the mansion is punctuated by comic book cut scenes and the occasional boss encounter.“