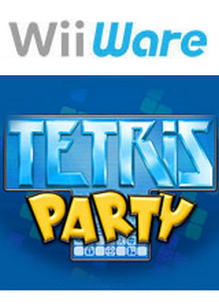 Tetris Party was delisted on the Nintendo Wii between late May 2017 and January 30th, 2019. In May of 2017 we recorded a complete look at all games on the Wii Shop Channel for YouTube and at this time Tetris Party was still available to buy.  The game would ultimately have been delisted no later than January 30th, 2019 when Nintendo closed the Wii Shop Channel.

The delisting is peculiar as this game predates Tetris Party Live for the Nintendo DS and was published by the same, officially licensed company, Tetris Online. The delayed removal may have simply been an oversight or it may have been kept online longer because it was the more popular or better selling of the two Tetris Party releases. However, the reason for the delisting is so far unsubstantiated.

“Tetris Party is a deceptively simple, totally addictive puzzle game that is sure to keep you and all of your friends and family entertained for hours on end. The WiiWare game features ten never-before-seen single-player and multiplayer variations of Tetris, including Field Climber, Stage Racer, Shadow, and Wii Balance Board-enabled modes. Several of the modes give users the chance to take advantage of the unique point-and-shoot capabilities of the Wii Remote controller. The party doesn’t stop there, though!“