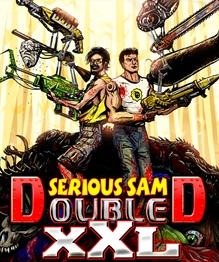 Serious Sam Double D XXL was delisted from Xbox Live Arcade by October of 2015. It was included in the The Serious Sam Collection which is also delisted in digital form. The game was delisted as Mastertronic Group went into Administration in November of 2015. A PlayStation 3 version of the game was in development but was never released. Continue reading for the whole story.

“Serious Note: Serious Sam Double D XXL is a NEW and ORIGINAL Serious Sam title! Yippee!!
It is officially sanctioned by the original developer Croteam, and is a part of their Serious Sam Indie Series.“