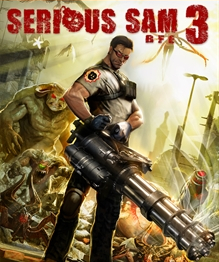 Serious Sam 3: BFE was delisted from Xbox Live Arcade some time after October of 2015. It was included in the The Serious Sam Collection which is also delisted in digital form. The game was delisted as Mastertronic Group went into Administration in November of 2015. Continue reading for the whole story.

“Serious Sam 3: BFE is a first-person action shooter, a glorious throwback to the golden age of first-person shooters where men were men, cover was for amateurs and pulling the trigger made things go boom. Serving as a prequel to the original indie and Game of the Year sensation, Serious Sam: The First Encounter, Serious Sam 3 takes place during the Earth’s final struggle against Mental’s invading legions of beasts and mercenaries.“