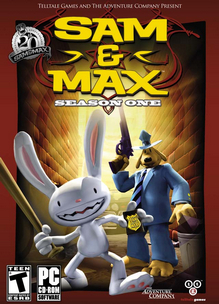 Sam & Max Save the World (aka Sam & Max: Season One) was delisted from GOG.com on May 27th, 2019. GOG.com Team member Chandra announced in a forum post on May 23rd, 2019 that all titles from Telltale Games would be removed from GOG.com on the 27th. The announcement read:

The Season One release was next delisted on Steam (standalone and in the Complete Pack) on November 9th, 2020 alongside the announcement of Sam & Max Save the World Remastered on PC and Nintendo Switch.

“Get ready to Save the World in this side-splitting six-episode “season” of gaming’s first sitcom. Canine shamus Sam and his hyperkinetic rabbity-thing partner Max are faced with a baffling mystery. All around them, people are ending up hypnotized. Washed-up child stars. The host of a popular television talk show. Even the President of the United States! Can Sam & Max find the mastermind behind this evil scheme before the entire world slips into a hypnotic trance? In this first “season” of the episodic Sam & Max series, you get six full games that take Sam & Max deeper and deeper into a sinister mind-control plot. Uncover clues, interrogate suspects, crack all six bizarre cases, and find out why Sam & Max is the funniest game series in years!“