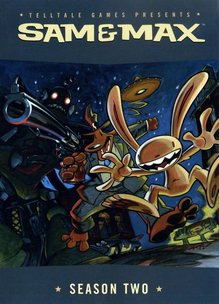 Sam & Max: Beyond Time and Space (aka Sam & Max Season Two) was delisted from GOG.com on May 27th, 2019. GOG.com Team member Chandra announced in a forum post on May 23rd, 2019 that all titles from Telltale Games would be removed from GOG.com on the 27th. The announcement read:

As of this writing the game remains available digitally on Steam, PlayStation 3, and Xbox 360  and on physical media for PC and Nintendo Wii.

“Join the Freelance Police for a 2nd season of adventure, crime fighting, and chaos! Sam & Max Beyond Time and Space is a 5-episode trek from the North Pole to the Fountain of Youth, from outer space to Hell and back. Babies will dance. Mariachis will sing. A giant battle robot will trash the streets. And when their friends are caught in the middle, Sam & Max will risk their very souls to set things right.“