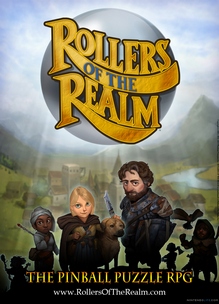 Rollers of the Realm was delisted from PlayStation 4 and PlayStation Vita sometime between September 2019 and February 2020. The game was last confirmed to be available in early September of 2019 when it was featured in a 60% off “Totally Digital” sale on the North American PlayStation Store. Its absence was pointed out to the site by @_BGuyle on Twitter on February 27th, 2020. Developer Phantom Compass confirmed the removal in a reply:

Thanks for asking — we recently regained publishing rights and are sorting this out with with the PSN folks. Not sure of timeline yet, it’s not entirely in our control.

On Steam the game’s publisher changed from Sega/Atlus to Phantom Compass on November 22nd, 2019, indicating that the PlayStation versions were delisted around this same time. Rollers of the Realm was then relisted for PlayStation 4 and Vita on April 7th, 2020. Phantom Compass confirmed the relisting in a tweet, apologizing for the delay in the process to change publishing rights on the PlayStation Store. The game was then briefly delisted due to an administrative error relating to publishing rights around October 8th but returned to sale on October 12th. Rollers of the Realm was then delisted worldwide for a third time late in December of 2020 or early in January of 2021. Phantom Compass tweeted again on January 19th, 2021:

Hey everyone, We’ve had to remove Rollers of the Realm for sale via PSN in all territories for all devices (PS4 & Vita). It’s possible the title will return to the PSN store some day. We’ll post any news here & our other channels. Rollers is still on Steam!

The studio replied to a now-deleted tweet further explaining that “it’s really messy to switch publishers on a title that’s already on sale. Sadly it was easier to remove the title completely than remove and relist. Hopefully we are able to put the game back on PSN at some point”.

“Persevere through the hands of tyranny use your brains, your reflexes, and your balls in this medieval RPG pinball game.

Imagined and brought to life by indie developer Phantom Compass, Rollers of the Realm is set in an era of medieval lands, corrupt kings, and castles of yore with a twist: bounce on and attack enemies as a pinball! Your characters are the balls—meeting new characters will unlock new sets of equipment and abilities.

Follow the story of the young Rogue and her Dog in this fully-voiced RPG that’s brimming with live environments and interactive puzzles. Get more coins as the Rogue, deal more damage as the Knight, and heal your party as the Healer. Switch between any of the 10 characters, take ball form, and strike!“

Thanks to BGuyle for submitting this game to the site