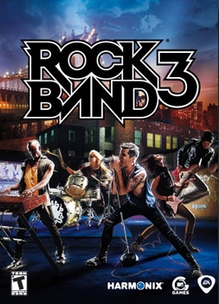 Rock Band 3 was delisted on Xbox 360 in October of 2015. Harmonix’s titles are typically delisted near the five-year anniversary of their release with the expiration of music licensing around the dozens of songs featured in the games.

Rock Band 3 delivers the deepest Rock Band experience yet with an incredible 83-song soundtrack featuring the music of Avenged Sevenfold, John Lennon, Jane’s Addiction, The Cure, Def Leppard, Ozzy Osbourne, Bob Marley and many more . Rock Band 3 gives players immediate access to more than 2,000 songs[1] in the ever-growing Rock Band Music Library and support for most existing Rock Band songs[2].  In addition, Rock Band 3 adds three-part vocal harmonies and introduces a keyboard peripheral to the band, allowing up to seven players to rock together for the ultimate social gaming experience.

Rock Band 3 also marks the debut of Rock Band Pro Mode, which bridges the world of gaming and real musicianship through a collection of new instrument controllers, trainers and gameplay options that open the door to real-world guitar, bass, keyboard and drum skills.