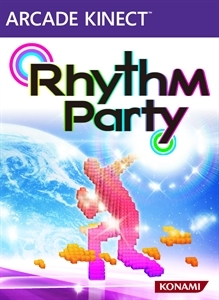 Konami Japan announced on December 26th, 2014 that Rhythm Party (Boom Boom Dance in Japan) would be removed from sale on Xbox 360 on January 30th, 2015, but that the DLC song packs would stay available for an unspecified amount of time. However, the game and it’s DLC was delisted on the announced date worldwide. The delisting was most likely due to the numerous songs licensed for the game.

“Rhythm Party” is a rhythm action game developed exclusively for Kinect on Xbox LIVE Arcade! Brought to you by the “Dance Masters” development team, it transforms your entire body into a controller. No need for choreography anymore. You’re the choreographer and the dancer! When your body appears at the center of the screen, just dance! Game play is simple: Use your arms and legs to hit the Ripples in time with the rhythm while you create an original performance. Your performance skills are the key! With a soundtrack recorded largely in collaboration with top international artists, and different special effects for every song, this game is guaranteed to get your body moving and your blood pumping!