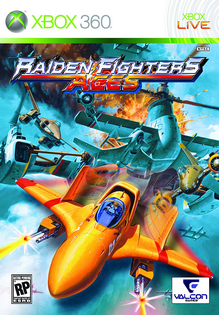 Raiden Fighters Aces was most likely delisted in the first week of January 2018. TrueAchievements.com posted a delisting roundup on January 9th featuring nine titles from publisher Valcon Games. As of August 2019 each title remains available to download on Steam, PlayStation 3, or both (as well as on physical media for various platforms).

“The hottest battle is back after the decade!The legendary shooting arcade game, [RAIDEN FIGHTERS] is back with Xbox360!The three titles in the RAIDEN FIGHTERS series is ported into one package,which includes some new functions like Score Upload or Game Clip.Get the highest score in the world via Xbox LIVE!“