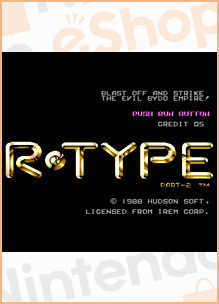 When it was released on the PC-Engine in 1988, R-Type was broken into two titles, R-Type I and R-Type II, that jointly encompassed the original arcade experience. The title screen of R-Type II uniquely identifies the game as R-Type Part-2 and this is the version that was released in Japan only on the Nintendo Wii Virtual Console in 2007.

As with the 1989 TurboGrafx-16 version, the 2006 release on the North American Nintendo Wii Virtual Console included all stages from the arcade version of R-Type. As such, R-Type Part-2 is technically included in R-Type Dimensions and R-Type Dimensions EX but not in the standalone version released on the PC-Engine and Japanese Virtual Console. Continue reading for more on Irem’s delisted titles.