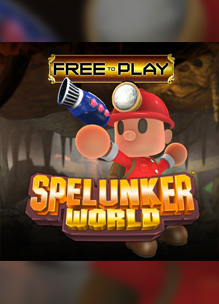 Tozai Games announced on January 29th, 2020 that their free-to-play PlayStation 4 and Vita title, Spelunker World (Minna de Spelunker Z in Japan), would be shut down on July 29th, 2020. The full announcement follows:

First, we would like to thank all the spelunkers who have supported and enjoyed our SPELUNKER WORLD. It is with heavy hearts that we will be concluding the service for SPELUNKER WORLD as of July 29th 2020, 8:00 PM (PDT). Below is the planned schedule regarding the end of service:

January 29, 2020, around 7:00 PM (PST): The Game and all Moon Gems will be removed from the PS Store, and in-app purchases will be disabled. * New Moon Gems will not be able to be purchased, but Moon Gems already purchased before the end of Moon Gem sales can be used until the end of the service.

Since the release of SPELUNKER WORLD in November 2015, we appreciate and thank all of the players who have supported our game, and hope everyone continues to enjoy spelunking during the remaining time of the service.

The game was most likely shut down due to low active player counts and decreased microtransaction purchases alongside the costs to keep the game online.

Gamepoch published a pared down version of the game on PlayStation 4 in 2017 exclusively for the Asian market. This version includes most of the content from Spelunker World but lacks the exclusive “Events” and gear from the Japanese and Western releases. As of this writing it remains available but as it was released two years after the original, it is expected to be delisted as well by 2022 or earlier.

Also in 2017 Tozai Games released Spelunker Party on Nintendo Switch and Steam as a full-price title featuring much of the content from Spelunker World. This repackaging of Spelunker World likely contributed to the decision to shut down the original game.

Listen to the game’s soundtrack on the Delisted Games YouTube channel.

“Embark on an underground adventure! Spelunker World is a free-to-play side-scrolling action game. Play as underground explorer “Spelunker” and venture in to the mysterious dungeons! Enjoy online multiply for up to 6 people! A new pet introduced! Change of outfits! New Characters! What awaits at the deepest parts of the caves?

Jump over dangerous pitfalls! Use bombs to blow up boulders that block the way! Use flares to keep bats and their guano at a distance! Blow away spooky ghosts with your portable fan! Head deep into a cave to find the mysteries that lie in its depths. A variety of traps, creatures, and even wicked ghosts within the caves will stand in your way—but the goal is to explore mysterious caves and find the legendary treasure waiting in the deepest depths. Let the adventures begin—Happy Spelunking!!!“