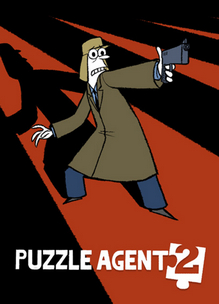 Puzzle Agent and Puzzle Agent 2 returned to GOG.com in early May of 2020. Like other Telltale Games titles that have returned to sale, both games are now published by Athlon Games with the developer listed as LCG Entertainment.

Puzzle Agent 2 was delisted from GOG.com on May 27th, 2019. GOG.com Team member Chandra announced in a forum post on May 23rd, 2019 that all titles from Telltale Games would be removed from GOG.com on the 27th. The announcement read:

As of this writing the game remains available on Steam and mobile platforms where it was originally released.

“Agent Nelson Tethers just solved the biggest case of his career. So why isn’t he satisfied? There’s still the case of a missing eraser factory foreman, a whispering madness is still creeping from mind to mind, and a troubling recurrence of… creatures… is lurking into the town.

The FBI’s Department of Puzzle Research has marked the case closed — are they sweeping it under the rug? Or worse, do they not even care? Worried that the case will languish forever unsolved, Tethers must go rogue and venture back to the eerie town of Scoggins, Minnesota to solve the mystery of “the Hidden People” once and for all.“