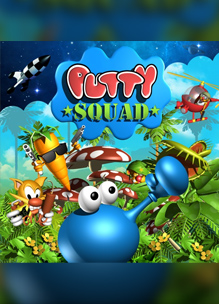 Putty Squad was last confirmed available on Xbox 360 on August 2nd, 2021. By the next Archive.org capture on January 21st, 2022 it had been removed from sale. As of this writing the game remains available on Xbox One as an Xbox 360 backward compatible release where it is published by System 3 Software rather than Maximum Games.

The Australian and Japanese versions of the game on PlayStation 4 have also been delisted although the timing of their removal is uncertain. We confirmed that these versions were unavailable in early September of 2022, however they were likely removed closer to the Xbox 360 delisting between late 2021 and early 2022.

Putty Squad is a no-holds-barred retro gaming experience brought to life for the modern gamer.Our hero, Putty, can inflate, morph, stretch, punch and absorb, taking on ferocious enemies on his mission to rescue imprisoned putties. Putty Squad features lovingly created levels that will test your timing, skill and imagination in a charming and incredibly addictive adventure.Accessible to the both casual and serious gamer, Putty Squad will keep you hooked for hours and hours of game play fun.