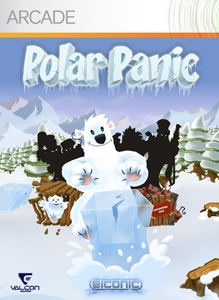 Polar Panic was most likely delisted in the first week of January 2018. TrueAchievements.com posted a delisting roundup on January 9th featuring nine titles from publisher Valcon Games. As of August 2019 each title remains available to download on Steam, PlayStation 3, or both (as well as on physical media for various platforms).

The game’s official site [Archive] shows Polar Panic running on a PlayStation Portable as a PlayStation minis release but no individual PlayStation Store page could be found to corroborate. It is possible that the PlayStation 3 download that is still available can also be played on a PSP.

“Mr. Big has set his sights on the rich reserves of the Arctic, and he’s hired hunters to clear out the local wildlife. Help Polar defeat the trappers, rescue his family, and force Globoco out of his home.

Thanks to @Mog666 for submitting this game to the site