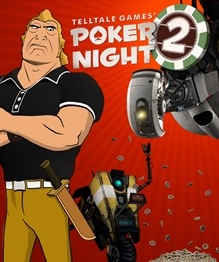 Poker Night 2 was delisted on Steam around September 11th, 2018 and shortly after on Xbox 360 and PlayStation 3. Telltale updated their own support page for the game with the following explanation:

“Poker Night 2 has been withdrawn from sale on digital platforms due to the expiration of our digital distribution agreement. We currently do not have any plans to renew this agreement.”

The game featured licensed properties from various publishers and media including Borderlands, Portal, Sam & Max, Evil Dead, and The Venture Bros., making re-licensing quite an ordeal especially as Telltale was on the cusp of announcing the closure of the company.

“The chips are down and the ante is up in this sentence already bursting with poker clichés! Take the fifth seat in Poker Night 2, at a table featuring Claptrap (Borderlands 2), Brock Samson (The Venture Bros.), Ash (Army of Darkness) and Sam (Sam and Max series). Play to win unique skins and heads for Borderlands 2 and exclusive premium themes for your PlayStation®3 XMBTM! Your dealer is GLaDOS (Portal), but at no point will you be considered as a candidate for a visit to Aperture Science’s Enrichment Center. Unless you lose.“

Thanks to Lorath and an anonymous reader for submitting this game to the site.