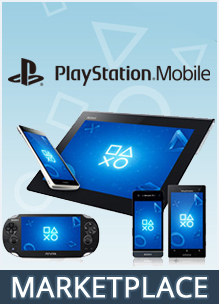 PlayStation Mobile was an online software marketplace available to “PlayStation Certified” devices. After nearly a year in private and open beta testing PlayStation Mobile was officially launched in select North American, European and Asian territories on October 3rd, 2012.The concept was to “deliver PlayStation content to open operating system-based, portable devices”. The flagship devices were the PlayStation Vita, Sony Ericsson Xperia Play and later, the PlayStation TV. A selection of Android tablets and handsets from HTC, Sharp, Wikipad, Alcatel and Fujitsu were also certified.

In May of 2013 — less than a year after launch — Sony waived the $99 publishing fee to encourage development on the platform. With a spiraling investment to keep up with Android development and minimal public interest in 2014, Sony limited support to the Vita and PlayStation TV with a 2.0 update. On March 10th, 2015 Sony laid out a timeline that would first remove the ability to purchase PlayStation Mobile titles and later retire the ability to “authenticate” and re-download them.

When will PlayStation Mobile become unavailable?

– Users will not be able to purchase PlayStation Mobile content
– New games will no longer be released.

What happens to my previously purchased PlayStation Mobile games?

You must activate your devices by September 10th so that you can keep playing your PlayStation Mobile games, Previously content was automatically authenticated whenever the device connected lo the internet but this will not happen after September 10th.

Don’t forget that you cannot re-download games after this date, so make sure you download all the games you want to keep. Provided you activate each of your devices once during this window you will be able to continue to play your PlayStation Mobile content You can activate a maximum of three devices.

The menu option for PlayStation Mobile remained active in the Vita’s PlayStation Store app until the release of firmware version 3.52 on June 23rd, 2015.

At E3 in 2012 Sony announced that 56 companies were working on content for PlayStation Mobile and that by August of 2013 over 100 games were available for it. PlayStation Mobile sorted games into various genres and also offered utility applications. There were unofficial Instagram and tumblr apps, proprietary online chat clients, calculators and QR code readers, weather apps, dice rollers and an unofficial Magic: The Gathering companion, among many others.

Sony Europe and Sony Japan both created exclusive titles for the platform including Beats Slider, Beats Trellis, Passing Time, Tokyo Jungle Mobile, Yu-Nama: The Puzzle and Everybody’s Arcade. Other noteworthy exclusives included Oh, Deer! Alpha from Necrosoft, one of the last releases on the platform, Behind You, Dodgecube, Bullion Blitz and Tuffy the Corgi and the Tower of Bones. An interesting string of releases from HAMSTER were the Appli Archives bringing dozens of (untranslated) early cellphone games from SNK, Nippon Ichi, Jaleco and other Japanese studios back to life.

Familiar titles and franchises that got their start on PlayStation Mobile or made an appearance on the platform include:

For more on the lineup and release schedule of PlayStation Mobile software see the following resources:

From August through November of 2014 I routinely recorded updates on the PlayStation Mobile marketplace. While I support the distribution of all games on any platform I wound up spending most of my time poking fun at the poorly translated game descriptions, endless Flappy Bird clones, and questionable apps. Despite the commentary, it did preserve a glimpse at how PlayStation Mobile worked and I went on to record a farewell video recapping some of my experiences with the platform.

Below is an edit of that final video (commentary removed) created in June of 2021 that shows the majority of the PlayStation Mobile titles available in the weeks before the marketplace was shut down. My older weekly videos will eventually be uploaded in their original format and added to this playlist.