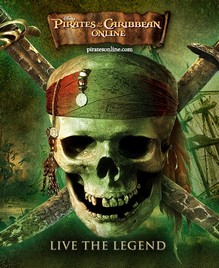 Pirates of The Caribbean Online was shut down on September 19th, 2013. A closing announcement and FAQ page were published on August 20th, 2013. The FAQ page fielded the question of why the game was shutting down:

Unofficial and fan-run versions of the game have been online since 2013, the most prominent being The Legends of Pirates Online.

“At launch, Disney Online will offer two options for Pirates of the Caribbean Online players – “Basic Access,” a free, ad-supported section of the game that lets players jump right into the action, or “Unlimited Access” that provides access to the full game as well as premium features.

With Basic Access, all players can experience many of the game’s compelling features. In addition, it allows advertising partners to associate with the brand through online ads and other interactive ad features that will not interfere with the gameplay experience. For a monthly subscription fee of $9.95, players will have unlimited access to all game content, advertising free. Unlimited Access will unlock features previously limited with Basic Access, allowing players to experience the game’s full range of customization, game play and community interaction.

With Pirates of the Caribbean Online fans of the franchise will get to experience the swashbuckling action found in the films right on their computer. Players create and customize their own pirate, build and outfit their own ship, assemble a crew and embark on quests for adventure and treasure in an effort to become the Caribbean’s most legendary pirate. Along the way, they will interact with characters made popular by the movies such as Will Turner, Elizabeth Swann and Jack Sparrow as they forge alliances with other players, hunt for buried treasure, battle evil undead forces, and face off against enemies on land and sea.“