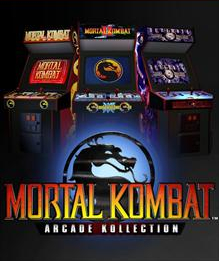 Mortal Kombat Arcade Kollection was officially removed from Steam on October 23rd, 2015 but was essentially non-functional as early as July 1, 2014. Microsoft’s move away from the Games For Windows Live platform rendered numerous games unplayable, this being one of them.

Download codes for the Steam version remain on sale from both GameStop and Amazon as of July 2017. The game can still be downloaded for both Xbox 360 and PlayStation 3.