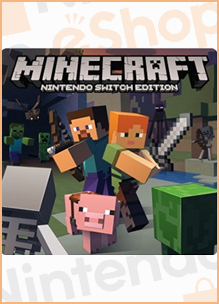 Minecraft: Nintendo Switch Edition was delisted on June 21st, 2018, one day after the release of Minecraft for Nintendo Switch which replaced the older version. Similar to the delisted Xbox One Edition, the original release for the Switch was replaced to incorporate new features including Realms and the Minecraft Marketplace. Prior to the delisting, pages for both versions of the game on Nintendo.com were updated to explain the change:

Current owners of Minecraft: Nintendo Switch Edition will be able to upgrade to the new version of Minecraft by downloading it from the eShop for free!

After June 21st 2018, “Minecraft: Nintendo Switch Edition” (2017) will no longer be available for purchase from the Nintendo eShop. Existing owners can continue to play. *Existing owners will be able to re-download this version if needed.

While The Super Mario Mash-Up Pack is pre-installed with the game, to access the remaining DLC packs included with the base game purchase you must download them from the in-game store.

A Microsoft Account is free and by signing in on device allows Minecraft players on Nintendo Switch to play with others on non-Nintendo devices. It also enables the portability of Minecoins and in-game store purchases to other devices.

You can purchase Minecoins in Nintendo eShop. Minecoins let you buy content in our in-game store, safely and securely. Minecoins are kept in your virtual wallet and can be used in Minecraft on other devices if you have a Microsoft Account.

Minecraft is a game about placing blocks and going on adventures. Explore randomly-generated worlds and build amazing things from the simplest of homes to the grandest of castles. Play in Creative Mode with unlimited resources or mine deep into the world in survival mode, crafting weapons and armour to fend off the dangerous mobs.

Thanks to Rafi H. for submitting this game to the site