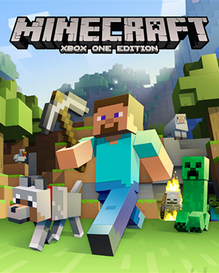 Minecraft: Xbox One Edition was delisted from the Xbox One on September 20th, 2017 and replaced with version 1.2.0 (aka the Better Together Update) simply titled Minecraft. The major advantage of the 1.2.0 version is cross-platform multiplayer features and of course ongoing updates as the original Xbox One Edition is no longer available.

Those who purchased the Xbox One Edition before September 20th or those who own it on physical media are still able to play the game and even purchase DLC. Anyone who had purchased DLC or played the Xbox One Edition for at least five hours between September 20th, 2017 and January 30th, 2018 received a free downloadable upgrade to the 1.2.0 version.

“Minecraft, the best-selling game on Xbox 360, is now available on Xbox One. Create and explore your very own world where the only limit is what you can imagine – just be sure to build a shelter before night comes to keep yourself safe from monsters.“

Thanks to walterbengt for submitting this game to the site