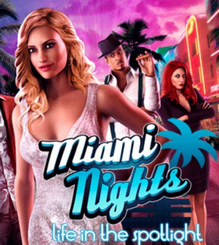 Miami Nights: Life in the Spotlight! was delisted from the Nintendo 3DS eShop on or before March 29th, 2019. This is the earliest date where a Google Cache archive shows that the game’s Nintendo.com page was online but with no option to buy. Site reader BowzasaurusRex submitted the game to the site on May 18th, 2019 recounting that it had been available to purchase directly from the Nintendo 3DS “within the past few months” but was now unavailable. The game was previously delisted from the DSi itself on March 31st, 2017 when Nintendo shut down the DSi Shop.

As several DSiWare titles from Gameloft remain available on the Nintendo 3DS eShop as of this writing, it seems likely that the delisting had something to do with licensing. The credits for the original Java version of the game do in fact cite a specific licensed song. It is also possible that this and other delisted titles from Gameloft were licensed from independent studios or were supported by internal teams that are no longer able to maintain the games, resulting in their removal from sale.

“You won’t find a more complete life simulation than Miami Nights: Life in the Spotlight! You’ll begin by designing your avatar with an unbelievable level of customizable physical details. But it isn’t your physique that counts, since your life choices and your everyday behavior will influence more than 40 attributes that will make you a unique, progressive individual! The city of Miami is laid out for you with no less than 30 places to explore!

Plus, you’ll be able to customize your entire home and interact with your environment in many possible ways. But the most important part of the gameplay revolves around how you interact with the other characters. They will be the ones who will help you achieve your goals. You’ll be able to establish and break off different types of relationships with them. It’s up to you to act like a bad guy or sweet girl, make friends or enemies, and choose the best way – honest or otherwise – to make your dreams become a reality.“

Thanks to BowzasaurusRex for submitting this game to the site