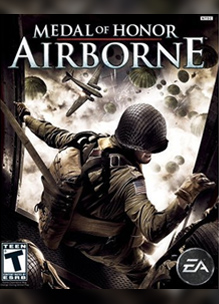 Medal of Honor Airborne was delisted on Steam on January 20th, 2022. The delisting likely relates to the game’s compatibility on newer hardware, however as of this writing it remains available on PC through Origin, both to buy and as part of the EA Play service. Released before the advent of Origin, the game also included a now-unsupported EA account system but online discussion looks to have ruled that out as a cause.

Step into the boots of Boyd Travers, Private First Class of the “All-American” 82nd Airborne Division, and revolutionize the way the war is fought. From a rocky beginning in Sicily to war winning triumphs in the heart of Germany, fight the epic WWII battles that turned America’s first paratroopers into combat legends. Begin each mission from the air and behind enemy lines, then jump immediately into the action. On the ground, tackle objectives in any order across an expansive, free-roaming environment, using a wide variety of upgradeable weapons to your strategic advantage.

**For instructions on how to switch language in-game after initial launch, see the README file available in game Support file.**